The rumors have finally been confirmed, Google is working on an operating system.

My thoughts on this are simple and limited: I see a small niche market for such an OS, but I just don't see the majority of computer users willing to accept web-only applications across the board. Connectivity is just too inconsistent and unreliable at this point, and even trying to own "constant connectivity" access (3G-based mobile and/or wi-fi access point access) is still way too expensive. Do we really think the 3G carriers are going to spend billions to make 3G as reliable and fast as the broadband that we're all used to getting at home and work? I doubt it. Without that, the web-only user experience will suck, because it won't be consistent.
Not to mention that I, personally, consider most web-based apps that attempt to replace a desktop app to be inferior in key ways. There are exceptions, and things are improving, but not enough for me to see this being a broad appeal by next year.

Having said that, I'm not foolish enough to bet against Google, who have quite a track record of success when it comes to delivering on new ideas and technology.
at 12:27 PM No comments:

UPDATE: As of Service Release 1 (SR1) of Eclipse Galileo (aka, 3.5.1) the process described in this screencast is no longer necessary for 64-bit Mac OS X builds. 64-bit Cocoa builds of all the download packages are now available directly from the Eclipse downloads page.


If the cave you've been living in does not have Internet service, then perhaps it will come as news to you that Galileo was successfully released last week. It's a truly impressive feat to release so reliably so many projects year after year - you'd think that corporate internal and consumer software projects would take note and figure out what it is that enables the yearly release train to succeed when so many projects deliver late, over budget, or not at all. But, I digress...

Being a recent immigrant to the Nation of Mac, I was among the glad to see the Cocoa port graduate from incubation. However, all is not 100% happy in Eclipse+Mac land. The Eclipse Packaging Project (EPP), the small group that produces those easily consumable downloads, the themed packages of plug-ins built on top of the core platform, has limited resources. And with limited people, they can not produce the packages for every hardware/OS platform on which Eclipse is known to run. Of particular interest to me is the conspicuous absence of EPP package builds for 64-bit OS X. After some discussion, it appears we the community can't make a 64-bit build happen until the first "service release" of Galileo, sometime in the Fall. I'm disappointed, but I (mostly) understand the position that EPP is in.

So, what do we do if we want to make full use of all the 64-bit goodness of our operating system and Java 6 JVM? Well, it turns out that re-constructing the EPP packages from the "base platform" SDK is not all that difficult. Ekke Gentz has already blogged some text+picture instructions; my screencast below brings the process to life.

Note: the URL of the EPP update site used in the screencast is


UPDATE: The package downloads page has been updated so that the Mac 64-bit SDK download is available directly, rather than having to go through the "Other Downloads" page. This makes the process a bit simpler than what is demonstrated in the screencast. If you're following this process for 64-bit Cocoa on OS X, you can get the Platform SDK directly in the Eclipse Classic section, as shown here (click to enlarge): 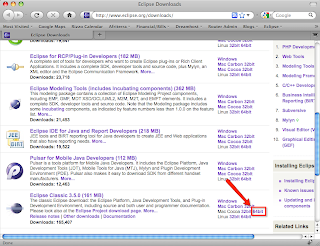