Jazmine and I competed in The Great Urban Race when it kicked off its 2009 season in Tampa this weekend. It turned out to be a bit longer than we expected, but was still a great time. We both had fun, got some exercise, and the best part is we are not itching to file for divorce after the ordeal / adventure! 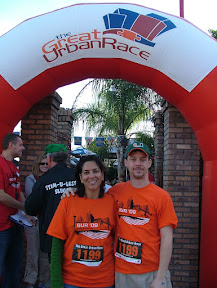 We didn't finish very quickly, 4 hours and 15 minutes which put us in 113th place (out of approximately 150 teams). The winner supposedly did the entire thing in under 2 hours, which I seriously think is impossible without cheating. I mean, we covered over 10 miles of distance and I just don't see how it could be done in less than 8 miles. When you account for having to figure out amd locate clues, it just seems silly to finish in under 2 hours, even if you seriously ran the entire route.
Oh well, we weren't there to win, we were there to have fun which we most certainly did!
You can see a map of our route, including all the stops we made for clues. According to that, we walked/ran almost 5 miles - no wonder I'm sore and worn out!
I give the organizers credit for making it challenging, but I was a bit disappointed in the decision to take us all the way to Hyde Park without a decent public transit option for getting there (at least, none that we could find that was available on Saturdays).
We did a couple of strategic things that I think helped a lot:
Here are the clues along with the "answers" when appropriate.

We got lucky on this one. The streetcar from Ybor to Channelside was packed with racers. Someone convinced a couple of friendly tourists to don their neckties and pose with some of the racers for the photo. I think at least 8 or 10 teams got the same picture thanks to the good nature of the tourists, one of whom even opened his suitcase (he was on his way to the cruise ship that was docked at Channelside) to get a tie to wear. 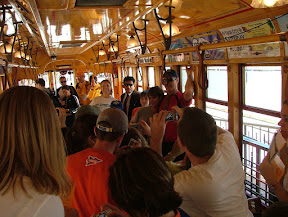 This was the last clue we did, and I'm embarrased at how badly my skeeball skills have deteriorated over the years!
Originally I was thinking we'd use this one or the Improv one (clue # 12) as our skip clue, but because we could not find the candy or shopper magazine from clue #4, we ended up having to do both. 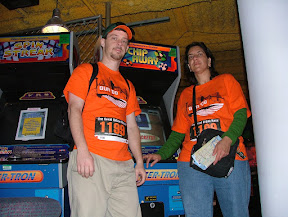 (Can you tell by our enthusiastic faces that we were nearing the end, of the race and our patience?)

Here's a map of the route we took (click "View Larger Map" underneath to see details and descriptions of the place-markers):
View Larger Map
at 11:33 PM 5 comments: